I spent the better part of the last week writing a really hard recap for the last episode of Lost. It was so good it was really hard for me to poke any fun at it, so the laughs just weren't there for the longest time. Plus it was kind of complicated. So the recap itself went to almost 4,000 words and I thought that would be tough to sit through if I didn't punch it up quite well enough. But I think I pulled it off, and I'm actually proud enough of it to make it a photoshopped picture from the episode to use as a link. If you like Lost and reading recaps, please click on the picture and enjoy! 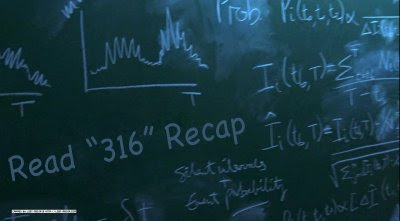 Calgon, Take Me Away!

I have two reasons for the infrequent updates: For one thing, I wanted to keep the Lost Party post at the top of the page since I'm so gosh darned proud of it. And secondly, I have been writing recaps of TV shows. And being sick. When I am sick, I can't do anything. My brain literally shuts down and I can barely write a Facebook status, much less a recap of an hour long action-packed adventure. I had to do The Office episode from after the Super Bowl, then the premiere of the second half of this season of Heroes. Then I had the fourth episode of Lost Season 5, then the regular Thursday episode of The Office (which is written; I will update with the link when I get it posted) and then the next episode of Heroes from this past Monday. I have to get that last one started because I have Lost epi 5x05 tonight and yet another Office tomorrow. My Lost Party - Let Me Show You It

As soon as the date was announced for the premiere episode for Lost Season 5 I began planning my Lost Party. My original plan was to have people over for the actual airing, but my wise friend Gerry suggested we should watch that in our own homes, undistracted and uninterrupted. Then we could get together to rewatch it after having time to stew on all the theories that arose. It was a great idea! The conversation, debates and laughs were in abundance and we all had a great time. What follows are pictures of what I did. Any of these pictures can be enlarged if you click on it, if you'd like to see more detail.

The Party Decorations:
Of course, the obligatory palm trees... 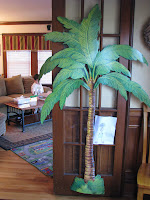 But this one has a little Hurley hanging out underneath, as drawn by my 5 yr old son. 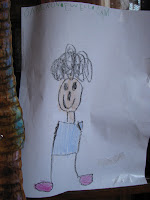 I put a generic tropical themed tablecloth on the table and thought it would be cute to add a little extra Lost touch... 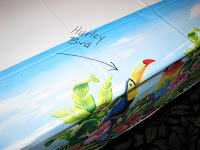 ...that led to an idea to add Lost quotes all over the plain white area in the middle of the tablecloth. I wish I had thought of this earlier; then it would have been completely filled. More on the jars you see there in the food section. 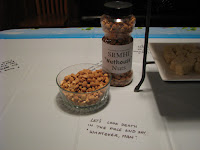 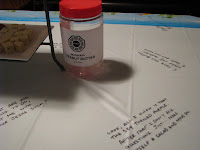 The Party Food:
This is the sign I made to hang over the "Hurley Buffet." The drawing of Hurley in the van was drawn by James Boudreaux II and I found it at his site, The Lost Boys Project, where he has lots of great comics based on the Lost characters. Hurley's Island Buffet:
"Where if you eat more comfort food,
You won't go around shooting people!"
Here's a closer look at the jars from earlier. For some unknown reason I did not get a shot of the jar of Dharma Ranch Dip and the veggie platter. Rest assured, it looked awesome. 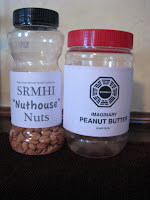 The table had two platters on it. The top has mangoes and papayas, for obvious reasons and the bottom has pepperoni and cheese in homage to Cheech's sandwich in "The Lie". Too bad my budget didn't allow for caviar or we so would have had those sandwiches, even if I had to guilt my guests into trying a bite. 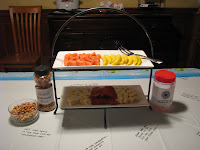 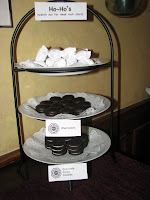 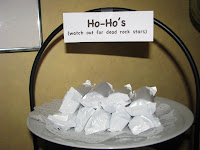 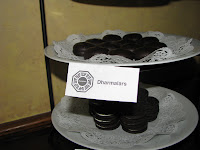 Ho-Ho's (watch out for dead rock stars!), Dharmalars,
Chocolate Cream Cookies
Next to the Tower of Goodies was a crock pot full of Mr. Cluck's Chicken Shack Breaded Baked Chicken Wings with homemade blue cheese dressing. They were awesome, dude.

The Frozen Donkey Wheel:
A lime margarita-style blender drink. The lime is cut to look like it has spokes coming out of it. And it was all kinds of yummy. Notice the Connect 4 pieces surrounding the drink. Somehow I also forgot to get a picture of the game as well. 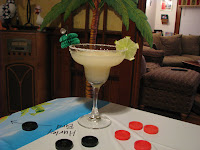 After I wrote "DHARMA" on them and put them in bags they looked like this. I also gave lil' Dharma polar bears. How cute are they? 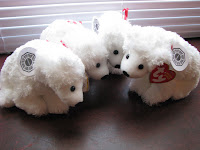 I had a lot of fun doing this and hope to do it again after the season finale. Off to find a recipe idea for a Flaming Frogurt...
6 comments:

Find All My Recaps for:

Stuff I Talk About

Other Sites I Love

At this point I have the comments set up to be available to anyone, even anonymous users. This is subject to change, because I have no idea if that's just an open invitation to spammers, trolls and other weird strangers* If it gets crazy I will change the comment availability to registered users only, so if you enjoy my ramblings, please go ahead and register. Thanks!!

Cayley
I tend to babble on and on about the things that interest me, including, but not limited to: various TV shows, certain video games, the occasional book, parenthood and whatever ridiculous situation in which I have recently become involved. Please do enjoy.