Well, I'm not going to win, that much is obvious. And at the moment my goal of, "If I just make it to halfway I'll be happy" is also about 5k words and 12 hours away from being a reality. I would love to say I am proud to just have written more words then ever before and gotten as far as I have in the story, but I am not. I wasted many, many days that could have been productive. Like today, for instance. I spent the morning playing Heroes trivia on Facebook. I could have written a grand or so in that time. Then there was that weekend early in the month where, instead of writing, I read Harry Potter books one, three and most of four. (who the heck did I lend book two to???) I may have written 4,000 words in one day last Monday but I haven't even tried to be productive since then.

On the up-side, I will say I really believe in my story. Every once in a while I write a passage that I think is pretty awesome. And a lot of my hesitation at the beginning was, as a good friend pointed out to me, because deep, deep down, I didn't think I could really do it. Now I know I can write 20,000 words, and even do one or more chapters in one day, and actually like what I wrote. That is a huge hurdle to get over, confidence-wise. Now I just have to tackle the Wall of Discipline. In an earlier post I mentioned the challenge I helped develop called R1. We have decided to do something different this upcoming January. We will have an "Add 25k Words to Your Novel Month". It can be something you've been working on for a while, or something you have just begun to think about. No rules, no restrictions, no cool web badges or counter widgets; just a bunch of people writing at the same time, checking in with each other and giving encouragement. Then comes NaNoEdMo.... but I'll worry about that another day.

Maybe, just for shits and giggles, I will try to make it to 25k by midnight tonight. If I make it, I buy myself the shirt. Because then, to me, I'll have earned it. Um... gotta go!
No comments:

Worker dies at Long Island Wal-Mart after being trampled in Black Friday stampede
From the article by Joe Gould, Daily News Writer:

Witnesses said the surging throngs of shoppers knocked the man down. He fell and was 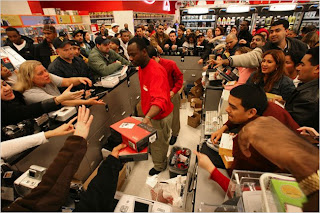 stepped on. As he gasped for air, shoppers ran over and around him.

"He was bum-rushed by 200 people," said Jimmy Overby, 43, a co-worker. "They took the doors off the hinges. He was trampled and killed in front of me. They took me down too...I literally had to fight people off my back."

Note: The picture is just random, not from the Wal-Mart story
No comments:

Labels: in the news

Conversations With My Son 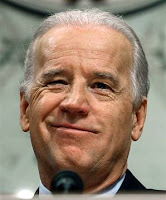 Me: He is the man who will be the Vice-President in January. 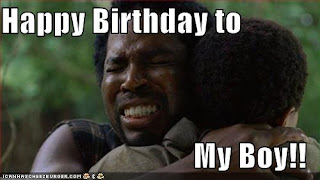 It may be the day after Halloween, but check this out.
No comments:

Find All My Recaps for:

Stuff I Talk About

Other Sites I Love

At this point I have the comments set up to be available to anyone, even anonymous users. This is subject to change, because I have no idea if that's just an open invitation to spammers, trolls and other weird strangers* If it gets crazy I will change the comment availability to registered users only, so if you enjoy my ramblings, please go ahead and register. Thanks!!

Cayley
I tend to babble on and on about the things that interest me, including, but not limited to: various TV shows, certain video games, the occasional book, parenthood and whatever ridiculous situation in which I have recently become involved. Please do enjoy.